2 week trip to Japan at Shunka-en

It has been a month or so since i posted.

Cause i really had the most enjoyable month in my life till now.

Thanks to Peter Warren a dream came true.

I had the oppertunity to stay and work 2 weeks at Kunio kobayashi’s place.
I really enjoyed it over there and miss it.

Allso the kindness of the Japanese people it wonderfull.

It started the day i was leaving by flight to Tokyo.

At the airport an older Japanese women was sitting next to me, she asked me why i was alone waiting for the flight to Japan.
So i said my story with a big smile on my face , that i was heading of to Shunka-en.
She gave me her adress and said that if i ever had any problems in Japan from what kind ever i always was welcome at her house.

after a few hours waiting i sat in the aircraft.
And a japanese couple next to me started talking with me, their english wasn’t that good so it got a conversation by writing.
They just gave me 1000 yen for my taxi to Shunka-en, i said i couldn’t accept it and they kept insisting that I had to keep.

After an 12 hours flight with great conversations and thinking wow these people are friendly and hospital. i finally arrived at Narita Airport.
I got the KEISEI bus to ICHINOE station to take a taxi to Shunka-en.

Peter Warren, Akiyama-san and Kobayashi-san were setting things up for the Kokufu market at green club.

So first i could look at the trees, antique pots and displaytables, museum and apprentice house.
And than the work could start.
I started by needle plucking, wiring and shaping a black pine.

When i left Amsterdam Shiphol airport 😀 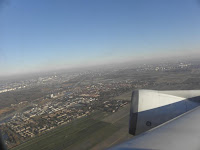 When i arrived above Japan
Beautiful mountains with a ricefield in the middle of nowhere.
And Mount fuji in distance. 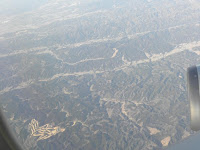 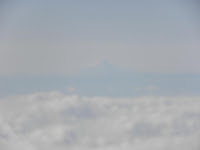 The costumer part of Kobayashi’s garden. 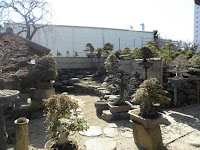 A satsuki covered in bandage , this is to prevent the sun can’t damage/burn the trunk. 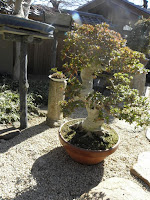 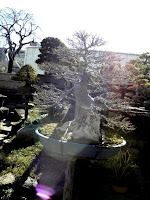 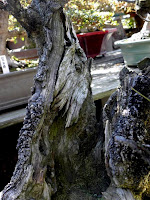 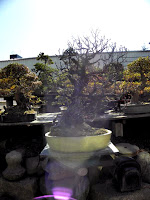 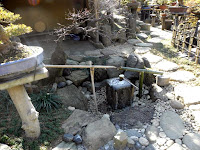 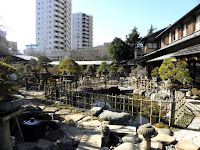 One of many satsuki’s 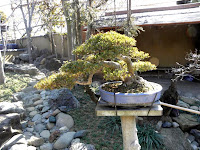 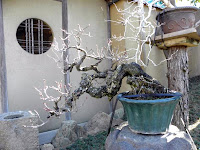 A nice old Pine with great bark.
Important for a Black or red pine is old bark. 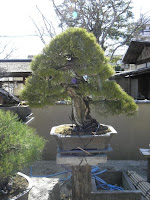 A beautiful Chojubai on rock.
It was among one of mine favourites. 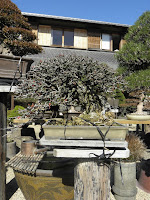 One of Oyakata’s most famous bonsai. 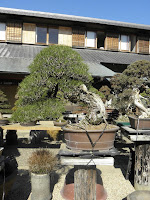 This is how a traditional Bonsai studio looks like.
Every summer the ground gets mixed with water and salt to make a harder surface.
But if anything would fall it’s still soft that it will not break. 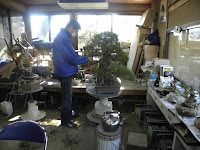 The black pine i could work on.
First we had to balance the energy of the tree by plucking needles.
This is for black that are healthy.
Strong(the top) shoots got 3 needles left.
Average(middle) shoots 5 needles
And small(lower) shoots 7 needles. 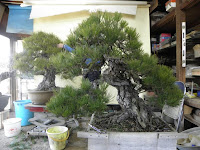 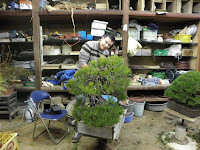 And the tree after plucking , wiring and shaping.
We used a guywire to get the second left branch closer to the trunk. 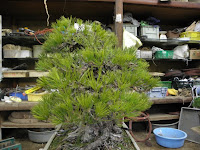 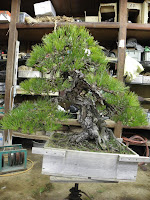 Here is a picture from above.
The top was styled flatter and with less green, much air and light woukld get in and in futute more buds will come to cover the top up. 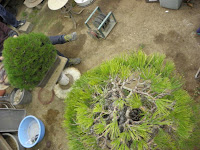 Oyakata told me the first left branch was grafted on 4 years ago from a bigger branch from the right side.

First they grafted a other pine on the branch.
they cut the branch off and drilled a whole in the trunk and put the branch in, cambium healed and in time the grafted pine could be removed. 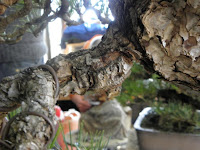 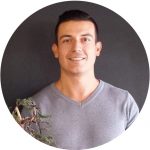 Yannick Kiggen is already 10 years active in the great passion Bonsai. In those many years he followed courses and workshops with several great Bonsai Masters